Gosh….where do I even begin? Was this our worst makan experience ever? Good and worthy Groupon deals are as real as a dancing unicorn? Don’t believe 100% you read in “preview” or “invited” food reviews? (yes, I’m gullible…unfortunately.) Should I write in bulleted forms because there’s so much to get off my chest (in case, our chests)?
……
……
……
Let’s begin from the start. Groupon alerts me of latest deals, and I saw there’s Seafood Buffet Dinner at Bali Hai. I have been to Bali Hai in Penang and love their food. Seafood buffet at RM55 per pax, RM100 for 2. Normal price is RM98.00 for 1 person. Plus, it’s a seafood buffet. Hey, that’s a very good deal. 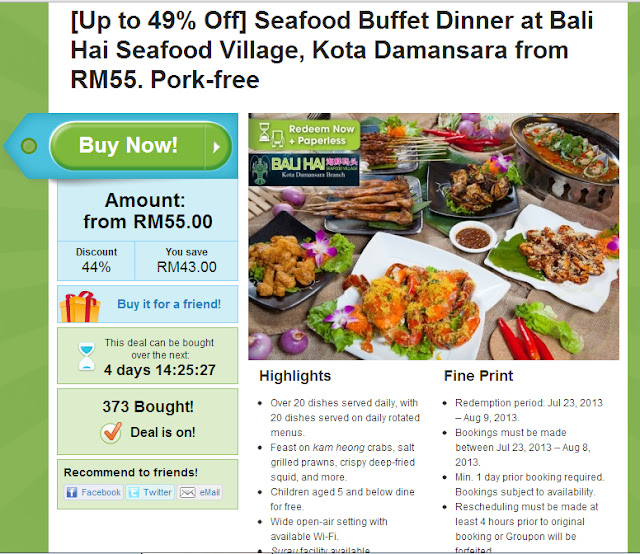 So yesterday, I googled to find out more about this deal.
Saw some invited reviews by bloggers.
Of course, everyone sang praises about the buffet especially about the huge oysters that they ate.
I excitedly bought 2 vouchers and we went there last night.
Then everything went downhill.
Issue No. 1: Seating
When we walked into the restaurant, I told the staff that I have made a reservation for 2. Gave her the voucher and asked about our table. It was so confusing. She pointed where the buffet food was and the buffet diners’ sitting area. I asked her again where is our table since I made a booking through phone earlier. “Oh, it’s free seating”. Pointed her fingers here, there and everywhere, then walked away hurriedly. The huge, round tables that she pointed at were occupied by families. Errrr….are we supposed to share table?
Fine, whatever. I saw some empty tables inside and a few others in the open area. I don’t like al fresco dining and it rained heavily about an hour ago. So we chose to sit inside, next to another makan buffet couple’s table. I asked BF to take his food first.
Seconds later, a staff came and asked me to sit elsewhere at the open area because apparently the table is for ala-carte diners only. So I asked why can’t I sit here since it’s empty? What if it rained again? Besides, the table is empty. Most seats in the open area were occupied. The rest of the tables were too far from the buffet area and chairs were not arranged properly.
His reply? “Do you see any rain now? If it rains, we will ask you to move inside. This table is for paid diners. Buffet seating is outside.” What??!!! I paid a freaking RM100 lah, not makan free.
Shit, BF was not there with me to help safeguard the table. I paused for the longest moment to kill some time while he and a few other staff just stood and watched me. Seeing that BF was still at the food area and me not wanting to create a scene, I gave up and moved to eat under the gloomy sky.
By the way, about 15 minutes later, the whole row of “paid diners” tables were taken up by buffet makan diners, including my previous table.
Sigh….how discriminating.
Issue No. 2: Food (or the lack of them)
BF returned, almost threw his plate on the table and wasn’t happy to find that they have asked us to move to another table. He wanted me to identify the staff so that he could complain. Again, I didn’t want to create any scenes. Let’s just makan and go home.
Makan?? He said there was hardly any food. A buffet with no food. Literally.

For us (especially BF), a good service is very important regardless of how delicious the food is. It could either make or break any restaurants.
We had many complaints about the service here, right from the moment we stepped into Bali Hai. Now this calls for bulleted forms (lol):
We hope Bali Hai Kota Damansara would improve on their service.
Their food in Penang’s branch was really good and I could still remember the them even though I was there in 2009.
Although we paid only RM100 and yes, it may be just a Groupon deal, but we think all diners deserve an equal treatment and good service.
The food was alright, I have no complaints.
However, the whole incidents of poor service, no food, long queue and waiting as well as scrambling for food were a huge, huge disappointment and nightmare for us.
A totally wrong reason to be remembered.
(plus it didn’t help when BF kept grumbling about the place throughout the night, even while we were watching The Wolverine….lol)
Well, all the best to them.
Oh by the way, there was no oysters last night nor in the buffet menu.
Those lucky invited bloggers and their “previews”.
😛